Last year’s teams; Aris Eagles, Attica Rhinos, Rhodes Knights, AEK, Athens City Raiders, Patra and Larisa – are expected to be joined by Albanian capital team Tirana RLC.  This follows over two years of talks between the GRLA and Tirana about the possibility of playing in the Greek League.  Last season was deemed premature by both parties, however several Albanian players made the journey to play matches with Greek teams.

GRLA President George Stilianos admitted to being excited at the prospect of having the Albanian club in the competition.

“Having been to Tirana in 2018 with the Attica Rhinos team, I saw first hand how much passion and potential they have up there.  If it wasn’t for money and logistics, we would have brought them in straight away.  However we need to be realistic and responsible in our approach.  There will be an East and a West conference, like we had last year. We are still finalising the exact details of how it will work,” Stilianos explained.

“It is a long and grueling trip, however we feel an obligation to help Albania with their development.  All too often, we’ve seen in European countries, where they have just one team, over time, with no regular matches and no certainty of their futures, these teams disappear.  We feel we cannot sit back and allow the same to happen in  Albania.  Hopefully giving them regular, meaningful fixtures will spark greater interest in the sport up there and help them start a second team and grow, making them self-sufficient.  I want to thank our teams for seeing the bigger picture and showing such a willingness to accommodate them, despite the already heavy travel schedule.” 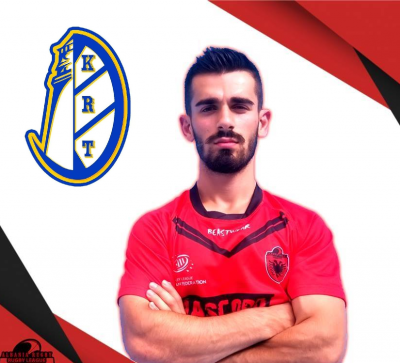 Tirana RLC captain, Shaban Penxho (pictured) commented:  “On behalf of the team, I want to thank everyone who contributed to this great achievement, especially the GRLA, for their huge support in this project. This is a big step for the future of rugby league in our nations. Developing our beautiful sport has been quite challenging in our countries, and this is a great opportunity. We are very happy with the relationships we have created with our friends in Greece and we are looking forward to taking things to the next level. Growing and developing rugby league in our communities should continue to be the main focus for both countries. Let this be the beginning of a long journey of improvement and achievements. I want to wish the best of luck to everyone involved in this endeavour. Congratulations!

Meanwhile the GRLA continues to seek formal talks with the Ministry of Sport and also the Hellenic Federation of Modern Pentathlon, in order to find a solution that will allow matches to be played without any interference.  GRLA officials are hopeful of a positive outcome and Larisa’s participation in next season is dependent on this happening.  The club have made that clear to us and we respect that, it gives us yet another reason to push for a solution.

On the women’s front, things are moving along nicely.  We have three teams confirmed; Aris, Patra and the Raidettes. We are aiming to add at least one more by the end of the year.  Once the situation allows, we will reopen talks with Serbia about playing our postponed international fixture.

Finally, our fixture with Wests Warriors fell victim to the COVID-19 pandemic.  Team representatives have stated a tour to Greece is still high on their agenda and they will look to find a new date as soon as the situation allows.

If you are interested in sponsoring any of our teams, they would love to hear from you!